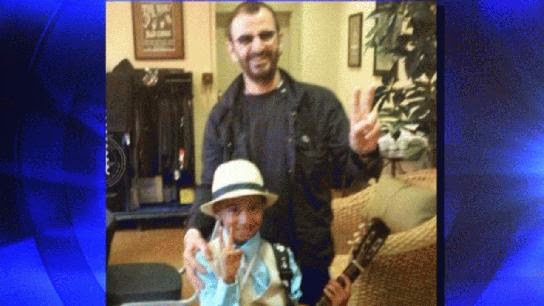 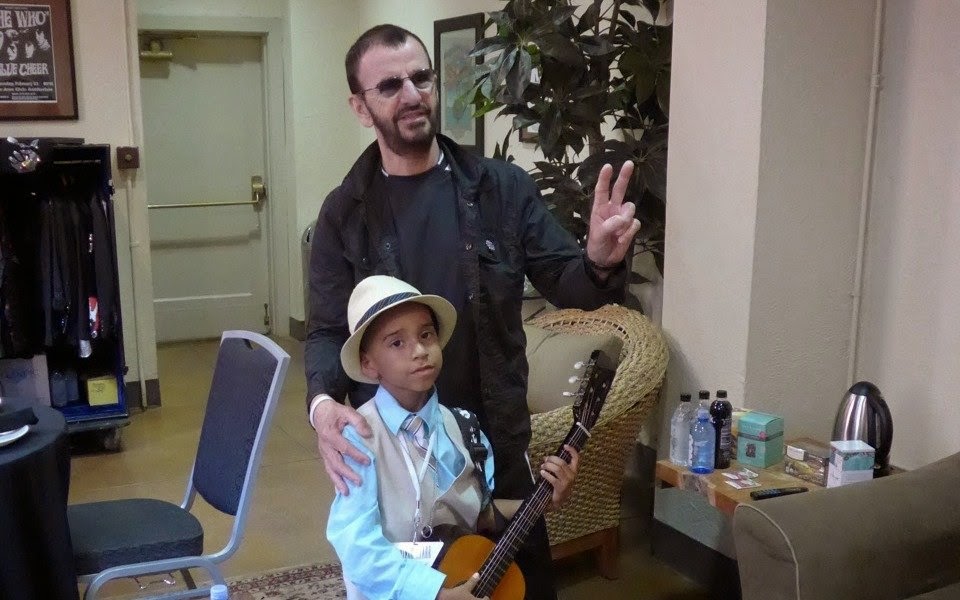 The best meeting the Beatles for Real story of the week goes to King Tobias.   King is currently 5 years old and is heading for the first grade in the fall.    As an elementary school teacher, I guess I have a special soft spot for first grade Beatlemaniacs.    I just think King is a sweetie-pie and I would love to have him in class.    Although, now that I think about it---being his teacher might not be the best thing because all I would want to do is talk Beatles with him.  Haha!

King has been a Beatles fan since he was two years old.   He only wants to listen to Beatles music and he is learning to play Beatles songs on the guitar.    His bedroom is full of Beatles items.      Why does he like the Beatles so much?    Well--this is what he said in a recent interview, "I like them because they have good music."  "They make music that's loving people, and don't want to hurt people."

King mom, Cali, has been battling breast cancer for the past 13 years and has recently learned that she also has ovarian cancer.   My heart just breaks for her, and I pray that she remains strong and is able to pull through this with the help of the right doctors and medication.     Cali, wants to make memories for her young son.   So she got tickets to see Ringo in concert with King at the recent show in San Jose.    Well---somehow phone calls were made and she was able to pull the right strings to get to go backstage and meet Ringo Starr!!  Whoo hoo!!!  Way to go King and Cali!

When King met Ringo, he said  "Hey, brother, give me a hug."   He told the young man that they were now brothers.  And how he went from having zero brothers to four.   Then Ringo allowed to play his drums!   Ringo asked Cali how long had King been playing the drums, and when he heard that it was his very first time playing them, he couldn't believe it.

What a sweet story and what a memory for this boy to have of meeting one of the Beatles with his mom.   I am sure that it is a memory that King will cherish for his entire life.   The mother and son are going to see Paul McCartney in San Fransisco next month and King got special permission to miss the first day of 1st grade to attend.