I can't express it enough how excited I get when someone contacts me with a story and/or photos about how he or she met one of the Beatles in person.    I know many of you out there are holding on to stories about how you meet one of the Beatles.  Maybe you don't want to share your story because you do not think it is very significant.    Let me assure you that it is!   We all want to hear your story and if you don't share it now, when are you going to share it?     You might have a story about a time that helps fill in a gap in Beatles history.  Even if you do not want to share your story with the world through this blog, please write your story down and preserve any photographs you have so that your loved ones will have it.   You might think that your loved ones do not care about the Beatles and your story means nothing, but let me tell you, from the emails I have received over the years from children of those who have passed away that are featured here, your Beatles story means a lot more to them than you realize.

One person that earlier this month sent me his story of meeting Paul McCartney was Paul Griggs.   Check out Paul's website to learn more about him and his music.    Paul has a LOT of great Beatle stories on his page!   He saw the Beatles in concert quite often in the 1960's, plus he saw them various other times.   He was at the concert of Jimi Hendrix when he played Sgt. Pepper for the first time right after the album was released!   And he saw George and Pattie in the audience.   He also has on his page a letter from George Harrison to him and a whole lot more Beatles goodies. 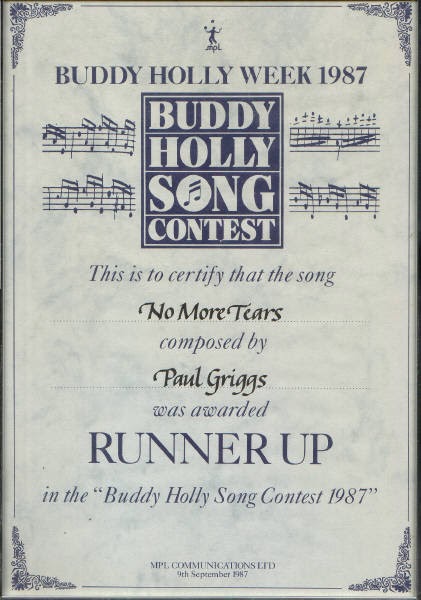 9th September 1987
Paul McCartney is a big fan of Buddy Holly and owns the publishing rights to Buddy's songs. For a number of years he arranged an event around Buddy Holly's birthday and in 1987 it was a "Buddy Holly Song Contest", which I decided to enter. I was well pleased when I had a letter saying that my song "No More Tears" had reached the final 10 and was invited by Paul and Linda to an awards lunch in London on 9th September 1987. It was held at The Dolphin Brasserie, in Belgravia, and I went along with my wife Lynne. We were some of the first people to arrive, and were told we could sit anywhere except on a large table with reserved on it. (I wonder who for). We were joined by guitarist "Mick Green" from "The Pirates, who was destined to play guitar on Paul's "Run Devil Run" album and Mike Maxfield who was lead guitarist with "The Dakotas". Also there was "Alvin Stardust" who was a fellow "Magnet Records" artist when I was with "Guys n' Dolls" and record producer "Pete Waterman" who had also worked at "Magnet Records". Paul arrived with Linda, his daughter Stella, "Twiggy" and her husband "Leigh Lawson".

It was a very enjojable lunch "veggie" of course, and after we had all eaten Jonathan Ross presented the awards and I received a "Runner Up" framed certificate, which I got Paul to sign. What do you say to one of your all time heroes. "I'm a big fan and I've got all your records", I don't think so. We talked about my brother Nigel's band "Split Enz" as I knew Paul liked them as he had brought their keyboard player "Eddie Rayner"  over from Australia to play on one of his albums. Mike Berry and his group were playing throughout the lunch and at one point Paul got up and sang a couple of numbers with them. All in all a most enjoyable time and they say "You should never meet your heroes as you will be dissapointed". In this case definately not true.
T