I know that I have been focused on the 50th anniversary of Beatles events lately, but I wanted to take a moment to remember an event that occurred 46 years ago today.   It is one of the events that I would set my time machine to go back in time and I would attend.    On December 17, 1967 George Harrison and John Lennon showed up at a party for area Beatle fan club secretaries (and one guest).   The area secretaries were given an early viewing of the Magical Mystery tour film that was to be released 9 days later.    I am not sure if they got to see it in color or not.   They then had what I always have known to be a "mixer" where you have some dessert and something light to drink and walk around to chatting to others.     During this time, George and John showed up unexpectedly to these fans.     The two Beatles signed autographs, posed for photos and chatted with their guests.    Each person there was given the 1967 fan club Christmas album and the Magical Mystery tour EP.

Last week on ebay one of the autographed Christmas albums was sold for $2,375.  Two photographs were also sold along with the autographs.    Here is the story that was with the auction from the person who obtained the signatures in person

The flexi record was given to me on 17 December 1967 when I went with a friend (who was Secretary of the Beatles Fan Club in the North) to see the preview of Magical Mystery Tour, at Hanover Grand in London.

We saw Magical Mystery Tour and were ushered into a reception room where we were offered tea and the most spectacular cream cakes I had ever seen in my life.
Whilst drinking the tea and eating the cakes, John Lennon and George Harrison came in - no one was expecting that! Also, Spencer Davis appeared (from the Spencer Davis Group).
Immediately all the girls flocked round them.
I then thought I would go up to the professional photographer, who was going round, and ask if he would take a picture of me with John Lennon. I said to him I would happily pay! - the photographer ignored me.
I went back and had another cake and then thought blow this, I will ask the photographer again, which I did.
He still ignored me, so then I went up to John Lennon and said "I have asked your photographer if he would kindly take a photo of me with you and I have offered to pay, and he ignored me twice".
John Lennon then beckoned to the photographer to come over, and take a photo of him and I. Then he beckoned George to come over too for a photograph.
The photographer took my name and address and a few days later, I received two black and white glossy photos with a compliment slip from the photographer, which I wish to keep for myself.
When we were at the private screening, we were given this Christmas flimsy record which was sent to Fan Club members. I can't even recall playing the record, it is excellent condition and on the sleeve it has the signatures of George Harrison, John Lennon and Spencer Davis'. 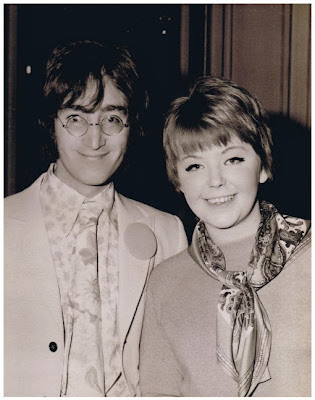 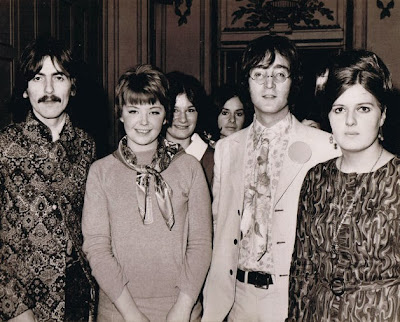 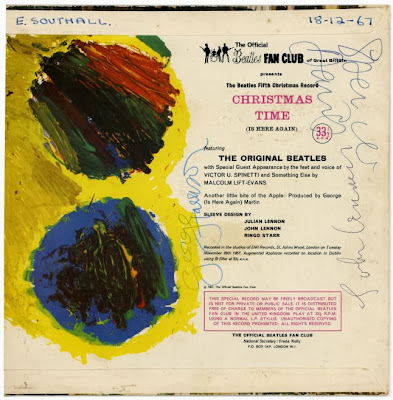