Today marks the 45th anniversary of the premiere of the Yellow Submarine.  Here is the story of how David Stark was able to meet the Beatles at the premiere.   This story was published in a 1988 issue of Beatle Book Monthly. 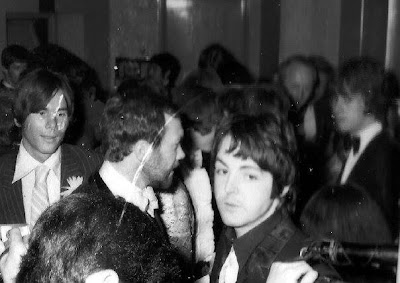 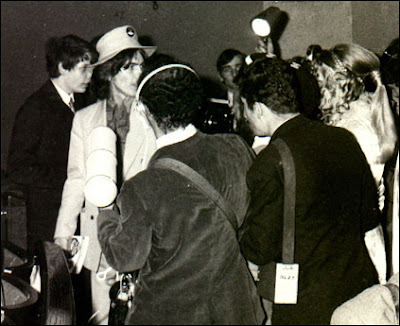 Yellow Submarine Premiere
Richard Buskin talks to a Beatles fan who managed to sneak into the exclusive premiere!

In 1968, David Stark was a fifteen year old schoolboy, who like countless other Beatles fans the world over was prepared to go to almost any lengths in order to meet up with his idols.  During the next few years he achieved this aim on several occasions, but the first and possibly the most daring of his encounters occurred on Wednesday, July 17, 1968, the day of the “Yellow Submarine” world premiere in London.

After arriving in Piccadilly Circus with a school chum in mid-afternoon, and spending several hours watching the gathering crowds from the roof of the cinema (thanks to an open door at the side and a conveniently placed elevator), the two lad managed to enter the theatre’s “dress circle” only to be stopped by an usher who demanded to see their tickets.

“I told him that we’d left our tickets when we came in downstairs,” recalls David, “and when the manager arrived and asked us why were there in the first place I replied that we had been sent tickets by our ‘good friend’ Clive Epstein, whom I had in fact met while on holiday a few years earlier.  Well, the manager wasn’t too convinced with that explanation and took us to the bar to find Clive – gulp! - but he was more impressed when I spotted Dick James and asked him if I had seen Clive.  He told me that he had been held up in Liverpool, at which point the manager said, “Okay, I can see you know people here.  You can stay, but next time hold on to your tickets!”  Unbelievable luck!
Even more incredibly lucky was David’s choice of seats – immediately behind the Fab four and their friends!

“We just stood around as everyone came in,” he recalls.  “I remember seeing Status Quo, Grapefruit and some members of The Who.  And then all of the sudden camera flashguns started going off everywhere, and the whole place buzzed as the Beatles arrived with their entourage.  They went down to the front row of the “dress circle,” closely followed by the photographers, and as the photographers left I noticed two empty seats behind Paul!

“At this point I was really sweating it out, especially when I looked to my right and saw that Iw as sitting next to Keith Richards of the Rolling Stones!  I thought we were going to be thrown out of any moment.  Eventually I plucked up the courage to ask him if it was okay to sit there, and he said it was, as the seats were reserved for Mick Jagger and Marianne Faithfull, but they were still in the States!  John Lennon then turned around and asked Keith Richards something like, “So who are you friends?,” and Keith said, “Oh sorry, haven’t I already introduced you to Mick and Marianne?”
A better opportunity to speak to John, Paul, George and Ringo came after the feature-length cartoon finished and received its ovation from the audience.  The Beatles stayed in the foyer, waiting for the pandemonium outside to subside a little and for their cars to arrive, and David took full advantage of the situation to talk to both John and George.

“Everyone was really up,” he recalls.  “They were obviously pleased with what they had seen on the screen.  John, with Yoko at his side, was telling me about the new Apple offices that had just moved into in Savile Row, and when I asked him if the Beatles were recording any new songs he said he’d been working on one that was constructed around a children’s nursery rhyme.  I worked out later that he must have been talking about “Cry Baby Cry”.  George, meanwhile, in his yellow suit and hat, told me he hoped his soundtrack album for the “Wonderwall” film would be released sometime later in the year.

“Apart from meeting the Beatles, the most vivid memory I have of that night was the incredible sight of thousands and thousands of people outside the cinema, all struggling to get a glimpse of their idols and chanting the chorus to ‘Yellow Submarine’.  Incredible!”
David did not attend the party held afterwards at the Royal Lancaster Hotel after all, he had not been invited!  But at least he had seized what was probably the last ever opportunity to experience Beatlemania at first-hand.
Posted by Sara S. at 11:09 PM