So easy even a Beatle can do it! 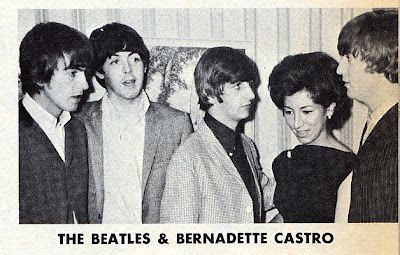 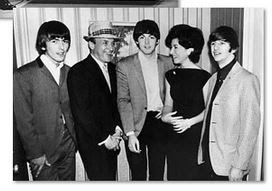 Here are our favorite four guys with Bernadette Castro, who was known for being in a popular commercial as a child for her family owned company, Castro Convertibles.   These weren't cars, but sofas with bed in them and the commercials showed Bernadette as a young girl pulling out the sofa with the statement that it was so easy, that even a child could do it.    She became the head of the company and owns it to this very day.

The only article I could find about Ms. Castro meeting the Beatles just said that due to the popularity of her ads, she was able to meet many famous people including the Beatles.   But by the time she met the Beatles, her ads would have been off the air since she no longer was a child.   It appears that Murray the K. was somehow behind this.   I am sure that the Beatles had no idea who she was and it was just another meet and greet for them.
Posted by Sara S. at 8:45 PM

Email ThisBlogThis!Share to TwitterShare to FacebookShare to Pinterest
Labels: 1964, Bernadette Castro, Murray the K, The Beatles