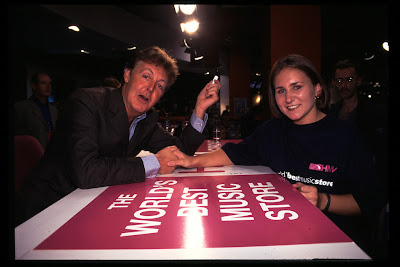 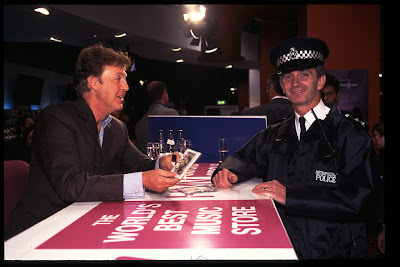 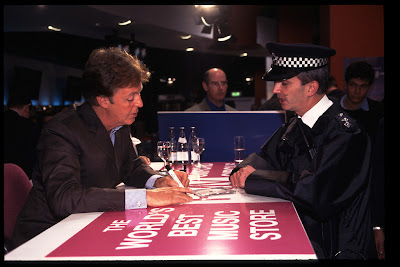 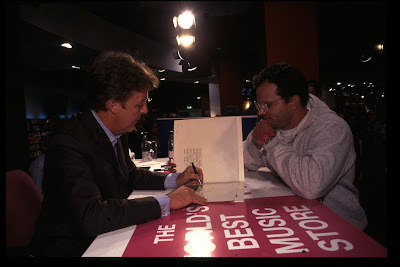 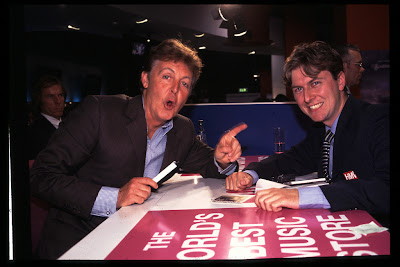 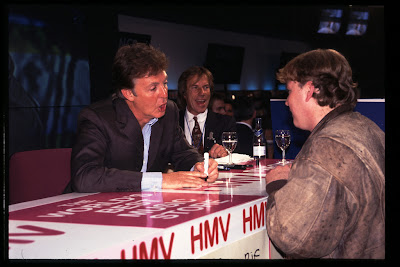 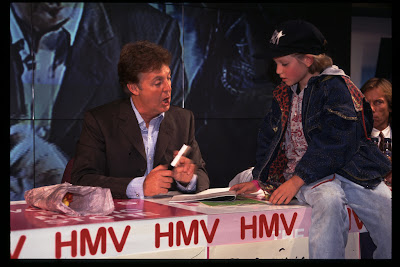 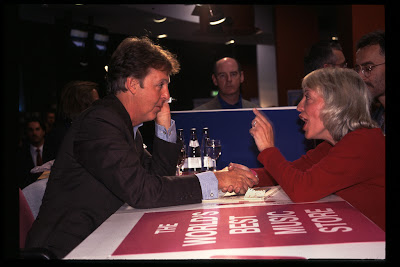 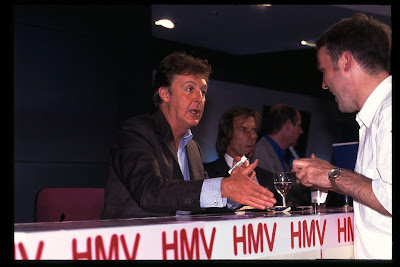 While promoting his album, Flaming Pie in 1997, Paul did something that any of the Beatles rare ever do.  He signed autographs for fans who waited in a line to see him for a few brief moments for a handshake, signing and a photo.  As you can see in these photos, Paul did not just smile for a photo and sign a record and scoot the fans along.    He really seemed to take a few extra moments and talk to the fans.


Thursday October 16 12:57 PM EDT
McCartney Signs Autographs At London Record Shop
By Susan Cornwell
LONDON (Reuters) - To the screams of teenagers and of fans reliving their youth, Paul McCartney returned
Thursday to the shop where he got by with a little help from friends who clinched the first Beatles record deal 35
years ago.
"It's one of the places where they launched the first Beatle records. So I had to come back, didn't I?" McCartney
told the cheering crowd outside the HMV record shop in London's Oxford Street.
Like extras in a Beatles movie, the fans roared back their approval as office workers waved from a department
store across the street.
Then the throng poured into the record shop for what organizers said was McCartney's first album-signing in
Britain since 1963. But many went away disappointed.
Security guards said some 2,000 people were allowed into the cavernous store. But only about 250 could line
up in a special queue to buy McCartney's latest albums, "Flaming Pie" and the symphonic work "Standing
Stone," and have them autographed by the former Beatle.
"I came today at 10 a.m. for nothing," said Kasia Brylska, 30, who was nearly in tears when she realized she
was only in a "picture-taking," not a "signing" queue.
"I came here especially from Poland for this and for the concert two nights ago," she said, referring to the
premiere of McCartney's "Standing Stone" classical music symphony at London's Royal Albert Hall Tuesday. "It
is a lot of money. I am really disappointed."
For others, though, just seeing McCartney -- now Sir Paul McCartney since he was honored earlier this year by
Queen Elizabeth -- capped a lifetime of devoted Beatlemania.
"I was one of those screaming girls who went out to Heathrow airport when the Beatles arrived and left in the
1960s," said 44-year-old Lynne Moran of London.
"But I never got to see them in concert. My mum said I was too young. She didn't know about the airport," Moran
said with a giggle.
At the other end of the age spectrum, Deborah Fletcher, 18, said she had been waiting in line for six hours.
"I've been a fan since I was 13. I saw the film 'Help,' and I just wanted to find out more about them," she said.
McCartney came to sign autographs at HMV to pay back a favor from 1962, when Beatles manager Brian
Epstein asked for help from an old pal, Bob Boast, then the manager of the record store.
Boast set up a meeting with George Martin, who was then a staff producer for Parlophone records, and that led
to a contract with Parlophone, said Rob Partridge, spokesman for HMV.
"Standing Stone," was another first for McCartney -- his first solo classical music symphony -- and it opened to
mixed reviews from music critics earlier this week. But on the sidewalk outside HMV, the crowd thought it was
just great.
"You could play a lot of Beatles music on the violin," said Lynne Baines, 47, who had driven several hours from
Liverpool overnight with her husband and 18-year-old son to see McCartney. "I don't see a lot of difference,
really."
Posted by Sara S. at 10:09 PM