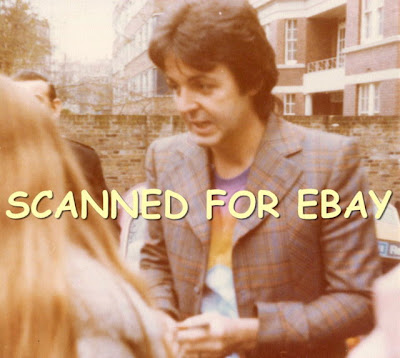 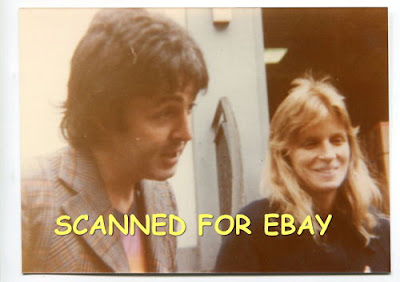 This story comes from the July 1977 issue of the fanzine, "With a Little Help from my friends."  It was written by Margaret Drayton and Kathy Turner about their encounter with Paul at EMI in 1977.  What was neat to be is that I bought the photo that was taken by Margaret during this meeting at a Beatles convention.  Now I know the story behind the photo.  I love that!

Tuesday, 22nd March 1977, 12:30 pm found us in the cold outside the EMI studios in Abbey Road waiting for Paul, who was then working on the new Wings album.  Barb Fenick & co. had told us that Paul usually go there at two o’clock but had been known to sneak in much earlier leaving Linda to arrive at 2pm and meet the fans.  Not wanting that to happen, we’d made sure we were there really early and by one o’clock Barb and all were assembled, cameras at the ready and slowly freezing to death.  And so Paul was late!  It was well after 2:30pm before a pink Mini roared up Abbey Road and tried to turn left into the car park – but another car was blocking the entrance, and so Paul had to stop.  He looked back and forth (with those eyes!) between us fans (staring right at Kathy) and the offending car, and then drove in the exit, pulling up in the reserved space right by the door.  We rushed in after him and watched him get out.  He was wearing blue jeans, a multi-colored t-shirt and an expensive check jacket, and he looked just great.  He came towards us where we stood shivering with the cold and of course nerves.  He looked straight at Kathy again Then one of the regulars took a photo and Paul turned to her and said, “Haven’t you got enough photos?” which you could tell he meant, but he was being nice about it.   He must have been feeling a bit fed up with seeing the same faces every day.  Margaret asked him for his autograph and his expression changed when he looked at her – either because she was out of focus she was shaking so much , or because he hadn’t seen her there before.  He signed hers and several other books and didn’t say another word about the photos that most people were taking.  As he made a move to go in, Kathy asked him for his autograph and handed him, “In His Own Words” when he turned to face her.  He signed it and said, “Have you read it?”  Kathy replied, “Yes, it’s quite good.” Then he said, “I haven’t read it yet actually.  Is it true?”—leaning toward her as he asked!  Kathy jokingly replied, “Well it’s up to you!” What a day – when that man looks at you it’s hard enough to cope with, but when he leans towards you and speaks to you – well…!  We watched as he and Linda entered the building and then shivered our way home, although it didn’t seem to be quite so cold by then – probably because our feet weren’t touching the ground1  Thanks Paul for being so nice!
Posted by Sara S. at 10:26 PM

Email ThisBlogThis!Share to TwitterShare to FacebookShare to Pinterest
Labels: 1977, Barb Fenick, EMI, Fab: An intimate life of Paul Mccartney, fan memory, Linda McCartney, With a little help from my friends