A fan  story about George's trip to Europe in  February 1977 to promote his album 33 1/3 is found in the May/June 1977 issue of "The Wright Thing."  It was written by Viviane Bourcreix who was from Pont de la Moye, France.  I find this interesting because I have never been able to find a whole lot of information about George's trip.  Included are just some photos from that time period. You can find some screen shots of the TV show mentioned in this story RIGHT HERE. 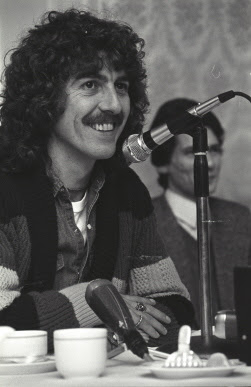 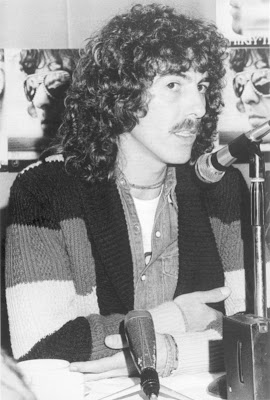 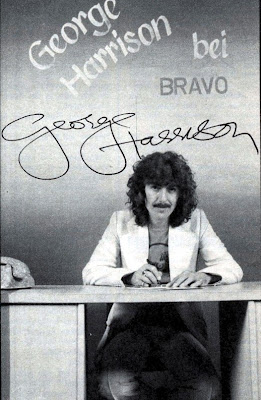 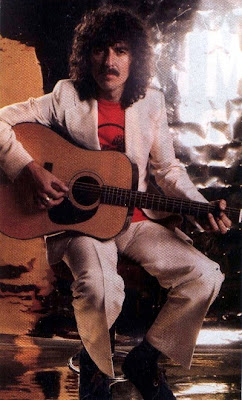 I had already heard very briefly about the parties organized by Warner Bros. but I was really glad to have so many details (Jan/Feb newsletter) and I thoroughly enjoyed the items written by George Tebbins and Tempy Snow.  I could imagine every minute and understood every reaction they had just as if I had been there.  Thank them for me.


It seems that George enjoys "blitzkrieg" attacks as you say:  he came to Paris quite unexpectedly.  I came to know it quite by chance on Feb 3rd that he'd be in Paris from Friday Feb. 4th for a few days to promote his "33 1/3" LP.  when I heard that, I just couldn't believe it, it didn't seem like him to come and promote his LP via radio and TV.  Then I thought, well, why not, after all he did it in the USA and in London, why not in Paris.  So I began phoning everywhere (to the French TV, to radio broadcasts...).  I was told that it was true:  George was expected both on TV and at Europe 1 (radio) so I decided to go to Paris, maybe I could meet him.  I couldn't know anything about this plane but I was sure he would arrive on Friday afternoon, and would go to the Plaza Alhenee a smart hotel (as good as the famous George V hotel where the Fab Four used to go).  He was then expected at Europe 1 at 7:30pm. for an hour programme (a few people could come and attend the "show" so I was there).  Can you believe I had been waiting for 12 years to see him live, God it was something!  He had already come to Europe 1 with his friends in 1964 & '65, so he knew the place well; as for TV it was the first time would appear there.  What a happening!

The place was hot when he came into the studio that evening.  He was smiling, splendid looking very gentle and healthy; his hair was all curly and he was wearing a mustache, he looked so young and really modest (he never played the "I am the biggest star" ya know?).  He was far more relaxed than when I watched him on TV.  (It was private there so we couldn't come in).

It's funny to see how he is so sensitive to the surroundings.  I mean, at Europe 1 there were genuine friendly fans who knew him well around him and he was so easy; on the contrary, on TV he knew nobody and we could clearly see that he didn't feel very comfortable, even though the journalist was all right.  At the end of the hour programme, during which he talked a lot, and said practical jokes, he came out and signed autographs with the loveliest smile you've ever seen.  I tried to take pictures but we were too nervous.