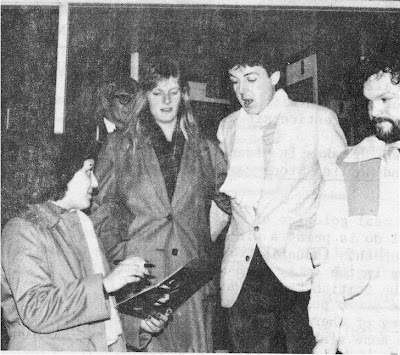 More from that same issue of "The Write Thing" (January 1980). This is a little story of when Barbara Fenick and George Tebbins saw Wings in concert in Brighton UK in 1979 and had Paul sign a photograph that George had taken of Paul in 1976. The autographed photograph (along with a colored version of this photograph of Paul signing it) ended up being the winning prize for a Paul trivia contest the magazine was having! What a prize!!!!

We drove up to Brighton with George the next day and had a great time stopping to take pictures of the castle in Arundel and the wildlife preserve. Still managed to get into town in early afternoon, picked up Susie and Doylene at the train station , get a hotel and get in line at the Brighton Centre box office. Already about 50-100 people were lined up around the building, for last minute standing room seats. We thought the box office might be holding our tickets there, but the security wouldn't let us in to check and the British fans were screaming at us about line-crashing. We did finally get in by the end of the line and our tickets were all there, it was general admission anyway with standing on the floor and seating in the balcony. We still had time before-hand to look for the hotel the band was using and we found it just a block or two down the street. Crowder (who is this??) was standing out in front with the the sourest expression I've ever seen, even for him! The night before he'd unbent a little and given us girls all Wings enamel badges (although he refused to give George one!). Now when he saw us he pantomimed throwing a bomb in our direction. And we were standing there very quietly, yet he said to George "haven't you anything better to do?" At 5 0'clock in Brighton what else is there to do? Anyway we hadn't traveled 3,000 miles to take a nap. So we continued to wait outside, checking out all the cars driving by. The hotel looked too posh for the likes of us, so we thought we'd have better luck waiting for him to drive up.

When the guy warming up the tour bus suddenly got up we knew that was the signal and Paul's car soon pulled up, double parked in front of the hotel entrance and he and Linda came around towards the crowd (it always grows) waiting for him. There was a mother with two babies, a couple workmen and few other little boys. All of whom of course managed to stand directly in front of me.

I waited patiently as everyone else was flashing their camera, waiting for just one moment when I could even see Paul. Finally the crowd parted to let Paul thru and as he came towards me I had him perfectly focused so I snapped. The flash went off in his face, just three feet away and he did a little jump back, I was so embarrassed I said something dumb like "I got one."

He went inside to join the rest of the band and we waiting around the stairs. I had a photo (which George had taken of Paul during the '76 tour) and everyone else stood back in kind of a semi-circle to give me a chance to get Paul's attention and so they could photograph him when he stopped. I gave my camera to Mary Ann.l The picture shows that he did stop for me, taking my pen and signing as he walked. Most of his name ended up on the black part of the photo but he tried!!

I had some words all rehearsed so I'd remember to say them and blurted out that it was Doylene and Marie's birthdays. Paul looked back at me, "today?" I paused, they didn't' say anything to help me out. (He wasn't supposed to say that). so I said, "No, Marie's was Wed. and Doylene's Sat." I think he just went "oh." Nonplussed or perhaps beyond hope, I continued about how we'd been in Tucson on his birthday, and we'd sung "Happy Birthday" to him. I don't think he heard a word of all that. But I sure felt like a perfect twit! Everyone had a good laugh about it later. I'll just have to wear a bag on my head the next time I see him. On the bus Paul was looking back at us all and lifting his eyebrows (Still trying to figure out what in the hell I was talking about?)