Win a Date with a Beatle! 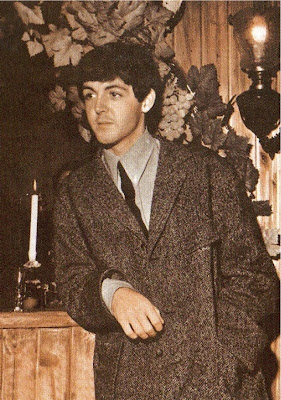 It seems hard to believe, but in 1963, Boyfriend magazine ran a contest where the winners won a date with the Beatles! Here is what the book Beatles London says about it.

Formerly Le Tre Fontane, this restaurant had just opened as the Old Vienna when the Beatles came here on 17 October 1963 to lunch with the four winners of a competition with the teen magazine Boyfriend (the four were also accompanied by two Boyfriend staff writers and a London newspaper journalist.) The contest had run in the 13 July issue, the same week that the magazine first published a photograph form its Euston Road session with the Beatles, later used as the cover of their EP Twist and Shout.

The four winners' first names were Karen, Vicki, Anne and Susan. they went from the Boyfriend offices to Nems Enterprises' office in Monmouth Street to pick up the group in a car, but Paul was the only Beatle to materialise. Having left a note for the others they drove to Bond Street, encountering huge crowds as they neared the restaurant. Paul and girls were ushered inside with the help of police. John, Ringo and George came in quite a while later. As for the seating arrangements, John, Susan, George, Anne and Ringo sat on one side of the table, with Vicki, Paul and Karen opposite.

the second part of the prize was for the four girls to attend a Beatles recording session. that afternoon they taped 'I want to hold your hand' and 'this boy.' but between July and October the Beatles' fame had become such that George Martin would not longer permit "outsiders" into their sessions. One of the winners, Vicki Mitchell, told us, ""I remember Paul McCartney ringing up George Martin to ask if we could come along and listen in, and he said no. So Paul came back, and we sort of carried on eating for a bit." Vicki also recalls that John and Paul were still writing I want to Hold your Hand during the lunch, and that before leaving the Old Vienna all four Beatles signed a wall at the invitation of the restaurant's management.