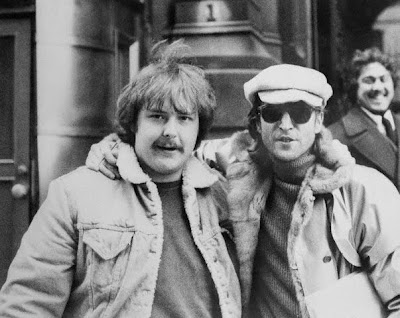 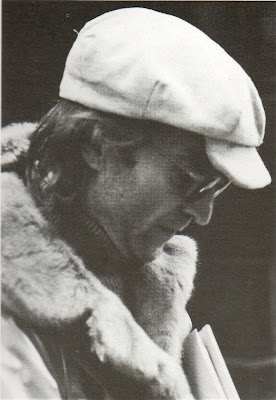 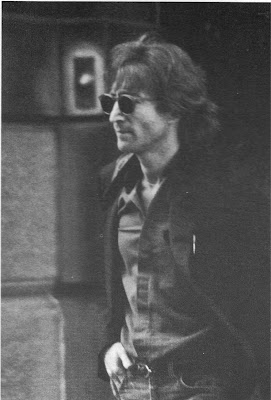 It seems like history has not been too kind to Paul Goresh. He is unfortunately linked with John Lennon's murderer, which really is unfair. Paul Goresh is the man who took the photograph of John signing a copy of "Double Fantasy" for the man who would later that night take his life. Obviously when Paul Goresh snapped that photo, he thought it was simply photographing John signing an autograph for a fan. Now it is up to you to decide if it was right or wrong of him to sell that photograph so quickly to the newspapers after John's death, but that has nothing to do with the fact that Paul Goresh was a fan of John's and had gotten to know John on a personal level during the last years of his life. I think it is unfortunate for him that history has him forever linked with the man who killed John. Anyhow...here are some photos Paul took as well as the one of him and John together (I love the door man in the background!) and what Paul had to say in the Summer of 1980 book.

My first meeting with John and Yoko was in February 1979 in their apartment at the Dakota. I have been a Beatle fan for the better part of my life, and a life-long dream was coming true. I was going to be face to face with the man I had always idolized. When I knocked on the door I didn't expect John himself to answer; but there he stood, gold-rimmed glasses, chewing gum and smiling. Evidently in my enthusiasm, I knocked harder than I should have, and John said, "I thought it was the cops," and with an extended hand invited me in. I was very nervous at this point, but I was immediately put at ease by John's well-known humor. I saw John and Yoko a few more times in 1979 and again in early 1980. When I heard the news that John and Yoko were going to start working in the studio, it gave me the impetus to photograph them as often as I could. Between August and December 1980 I think I spent more time at the Dakota than doing anything else.

I will always cherish the meetings I had with John. He was very gracious to me, and the more I saw and photographed him, the more charming he became. John always took several minutes of his precious time for me., although the word precious doesn't justly descibe what my many times with John mean to me. In the almost two years I knew John he was always a gentle, king person. I have copies of In his own Write and A Spaniard in the Works which John signed for me, a signed photo, the pens he used, and several photos of the two of us taken on November 17, 1980. These material possessions give credence to what now seems like a dream.

December 8, 1980, became a day I will always remember vividly. It was the last day I ever saw John. He said to me that evening, as he was leaving the Dakota, "I'll see you tomorrow," for we had arranged for me to show him some photos I had taken on him and Yoko on December 2, 1980. John never saw these photographs, and neither of us realized I was going to take two very important photographs that very evening --- one of John and the one of the person who was to take him from us. They were the last photographs of John alive, photos of him getting into the limousine. John never saw these photographs either. I will always have the memories of the times spent with John, but this one especially. After John got into the limousine on December 8, 1980, he waved goodbye to me as the car pulled away. That wave will always be very special to me.

For the next two weeks my world was completely devastated, and it was Yoko's kindness which helped me accept John's death a little more easily. She opened her doors and her heart to me in the following months, and they have stayed open. My contribution to his book , and Yoko's choice of one of my photographs for the record "Watching the Wheels/I'm your Angel" overjoyed me.

The last thoughts: Yoko, thank you for helping me through my own personal hard times when you certainly had more than your own share; and John, thank you for all the fine memories you've given me, and all the beautiful thoughts and music you have left with all of us. My love to you both