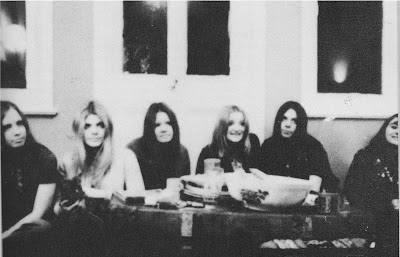 From the Longest Cocktail Party by Richard DiLello

The House Hippie saw them standing in quiet knots of two and threes all through that first Wigmore Street summer and thought to himself, "They'll go away when the weather gets bad." He was wrong.

After seeing them day after day for month after month he started looking at them. He noticed a handful of faces that were permanent pavement fixtures. When he went to deliver a parcel to Paul McCartney's house they would be there. When he had to go to Abbey Road they were there. When a shorter journey was involved to Trident Studios where one of them might be working they were there.

They would be standing by the cast-iron white picket fence outside Number 3 when he went in at ten and some nights leaving at eight they would still be there. The faces would remind him that he had seen them at least half a dozen times that day as he had exited on a half of dozen separate missions.

There are Beatle fans and there are Beatles fans; that much he knew. It was becoming clearer to The House Hippie that these girls were not just any old Beatle fans. They were always positioned on opposite sides of the steps when the obvious, one-day-wonder fans from America and Europe were out in force for an unimpressive two-hour vigil. They retained an aloofness from these hysterical screamers that bordered on supreme dignity.

It never mattered what the weather was doing. They stood there and allowed the rain to soak them and the wind to cut through their young-girl clothes. At last it dawned on him. He knew they would be there longer than anyone else; after everyone else had left, they would still be there.