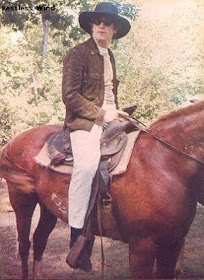 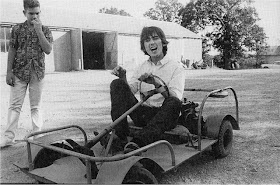 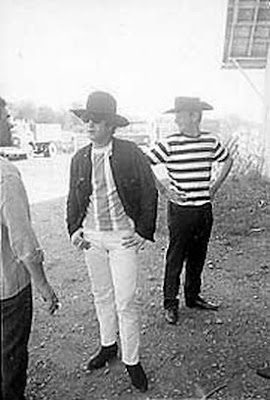 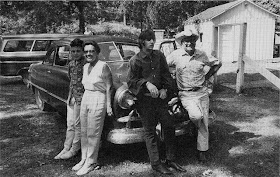 This is an article I found in the September 1994 issue of What Goes On (the newsletter for the ST. Louis Beatles fan club). It was originally published in the May 1986 Springfield, Missouri magazine called Film at 11. While it doesn't go into a lot of detail about the Beatles fans who met them during their stay in the Ozarks, it does give some information I didn't know. The photos are all from Curt Gunther's book on the Beatles 1964 tour. (excpet for the color one of John...I just included it for the "John is a hottie" factor.)


It is a little known fact that the well-known Beatles spent a weekend relaxing in our part of the Ozarks. On September 22 and 23, 1964, John Lennon, Paul McCartney, George Harrison and Ringo Starr attempted to rest in seclusion at the Pigman ranch near Alton and Riverton, Missouri.

Reed Pigman, ranch owner and Texas airline magnate, had a contract to fly The Beatles on this, their second U.S. tour. He invited them to relax at his ranch before heading on to New York and their last performance before returning to England. The tour had already covered twenty-five cities with thirty-four concerts in thirty days.

On Friday evening, the Beatles performed before 15,000 fans in Dallas, Texas and then they flew to Walnut Ridge, Arkansas. There Pigman picked them up in his twin engine seven passenger Cessna and flew them to Oregon County, Missouri. They arrived at 3 a.m. Saturday morning at the ranch and played poker until dawn. Other members of their touring group joined them, including their manager Brian Epstein and Bill Black of the Bill Black Combo. The group totaled fourteen.

The ranch offered a beautiful view of the Ozarks to the guests. Ringo said, “It reminds me of England.” The 12,000 acre cattle ranch is near the Irish Wilderness and lays along the Eleven Point River. A long lane was lined with roses, and the grounds and swimming pool area were beautifully kept. It was quite a fancy layout, especially for that part of the Ozarks. At that time, the home was used frequently as a summer and weekend retreat for the Texas-based Pigman family. Hired help, four families in all, lived on the ranch year round.

By mid-morning Saturday, the media had spread the word of the Beatles’ unlikely vacation spot, and fans began to arrive.
The first car load was a local group, mostly twelve and thirteen year old girl from Alton. They parked out of sight of the house and walked up the lane to the swimming pool. A man (they supposed him to the Beatles manager) came out and said The Beatles were going skinny dipping in the pool and unless the girls wanted to see the group naked, they’d better leave. They left immediately.

There was a clearance check at the gate, and only people who lived on the premises, the press, or friends and family of the ranch crew were allowed in.

Ranch manager Ray Dethrow was one who manned the gate all day and night without sleep. A mother, daughter, and friend who had driven down from Springfield were frustrated, if not angry, as not being allowed to get in to see The Beatles. Dethrow admitted a local car through the gates and the daughter caught hold and came in also. Once inside the gates she pretended to faint, and the mother became even more upset. Dethrow quickly assured her, “Don’t worry, Mama. I just vaccinated an old cow out in the field. I still have the hypodermic needle in the pickup over there . A shot of that and she’ll be fine in no time!” The daughter picked herself up and went back to the other side.

There were reports of persons climbing the six foot high chain link fence and running across the pasture to see The Beatles. A few stayed around in the yard in the evening until Pigman came out and politely said The Beatles weren’t going to make an appearance so they might as well go home.

Saturday night, four people form Alton took a motor boat down the Eleven Point River to get a close look. They were Don and Judy Woods, Bob Gum and Richard Haigwood. Don Wood knew the river well and maneuvered the boat with only the moon as light. As they walked the almost two miles from the river to the house, they were awed by the sight of the Pigman’s peacocks along the way. They peered into a window at the side of the house and saw The Beatles playing cards and drinking with their friends.
As first the ranch crew was not told who would be visiting that weekend but only that “they were very important visitors.” They were also told to clean the house from top to bottom. When the press began inquiring about rumors of The Beatles coming, the crew would have thought it a hoax had they not known Pigman was flying The Beatles on their tour. Mary Lee Dethrow answered one of these inquiries Saturday morning, and her response was heard on Kansas City television, “We haven’t seen any activity yet. If they’re here, they slipped in like beetles.”

The crew had also been instructed to make sure when saddling up horses for the guests to ride, that they choose only horses that were no longer used to work the ranch because “they’re Easterners.” When the photos came out in LIFE magazine, Pigman and the crew laughed. Ringo had ridden Ole Doll, who was well over the hill then and long since dead. He is shown atop a somewhat swayback mare with its head drooping toward the ground. Not exactly the fine equine specimen they might have wanted to represent the ranch in a national magazine.

The magazine captions for these photos read, “Paul and John ford a stream. ‘I wouldn’t call riding a sport. It’s just to get someplace,’ says John. ‘We were bruised,’ Paul says, ‘I mean physically damaged.” This was the first horse-back ride for most of them. Ronnie Combs, yard boy at the time, remembered Paul asked him to hold his camera for him while he mounted his horse.

Ringo wore a gun belt and cap gun while he was at the ranch. The gun belt with his name on the back was a gift from Elvis Presley, and he bought the guns at Woolworths. Ronnie Combs remembers him shooting his cap pistols off the porch one morning, “Ringo was like a kid,” he says.

Paul and Ringo were reported to have the most outgoing personalities. John and George seemed to be loners and spent a lot of time around the barn while outside. George played cards a lot. Paul hlped search through closets at Ray and Mary Lee Dethrow’s house for fishing gear so he and Ringo could go fishing at the pond. Mary Lee assisted him while members of her family, who she had invited to her home on the ranch so they would have an opportunity to see The Beatles, watched and were tremendously impressed by Paul (When he entered the house he had patted five-year-old Sheila on the head, saying, “Hi kids. How ya’ll! My name’s Paul and I’m from Walnut Ridge, Arkansas.”) Long time ranch mechanic Wayne Neal concluded they had nice personalities, but they were a lot of trouble.

A 1960 Ford Fairlane four door sedan was borrowed for the Beatles’ use while there. J.B. Gum Motor Company of Alton lent it without knowing who the Pigman’s guests were. The car was driven around the barn but was not taken off the premises of the ranch. While one of them, possibly George, was driving the car, he knocked the door off manager Dethrow’s pickup truck (the car had formerly belonged to Albert Haigwood who used it to deliver the mail at Alton.)

The Beatles did not bring musical instruments to the ranch and did not perform their music while there.

A baby shower had been planned at the ranch crew home of Junior and Susie Lance on Saturday night. It had to be moved to the nearby Riverton Baptist Church because the first carload of guests to arrive topped at the main house in attempt to see The Beatles.

Billmore, Job, Gatewood, Myrtle and Couch – those are some of the communities close to the ranch. People in these places reacted in various ways to The Beatles’ presence. Disdain was shown by some old timers, disinterest was shown by many, curiosity by some, and joy for a few fans. One young man, Junior Brewer, did not know of the presence at the ranch. He went there that Saturday to inquire about a job hauling hay. He saw The Beatles driving the car around the barn but wasn’t much interested or impressed.

A minister disapproved when one mother he knew took her daughter and her friends to see The Beatles on Sunday morning instead of attending church.

Sunday about noon, The Beatles left for Walnut Ridge to board a jet for New York. Though many greeted them at Walnut Ridge airport, the departure scene here was quiet. Apparently few fans knew where the landing strip was as only a handful of people were waiting to see them off. Terry and Linda Hall and two others drove out into the woods to the landing strip and waited an hour.

The four were sitting on the hood of their car waiting “out in the boonies” when Pigman and the Beatles arrived. Linda’ strongest impression was that they didn’t have a tan. “They had a strange, sickly pal look, a London chalky look.” No one in her group asked for an autograph or an arm. There was only a “hi” and nodding of heads exchanged between them in greeting. Perhaps it was George who continued to stare out the window as the plane moved away. Linda wonders what he was thinking, and what they thought of those Ozarkians sitting here.

Ranch hand Junior Lance took the sizable amount of baggage to Walnut Ridge airport by flatbed truck. On the way he made a stop at his sister’s home to allow the young nieces a chance to look at The Beatles’ luggage. Niece Ann Koontz says he just wanted to taunt them. They begged him to let them open just one suitcase to get something out as a souvenir, but he refused to do so.

Many have written the ranch asking for a souvenir of The Beatles stay there. Lucille Neal, cook and house keeper at the time, has special souvenir of her own. Just before The Beatles left on Saturday morning, Paul came to the kitchen asking if anyone had seen his gas Ronson cigarette lighter which carried the inscription “Paul”. He had just purchased it at Neiman-Marcus in Dallas, Texas. They weren’t able to find it at the time; however, a month later it was found near where Paul and Ringo had gone fishing.

Of those interviewed, almost no one took pictures or even knew of anyone who did. We were caught unawares and ill-equipped. Had The Beatles or like group visited in the Ozarks today, we would be ready with our tools and toys which modern technological “progress” affords. Twenty-three years ago, Nikon and Minolta and telephoto zoom lenses were unknown to us, and perhaps it was the era of innocence and isolation which was about to draw to a close that led so few to devise elaborate schemes and plans to catch a glimpse of the superstars.

Even thought they were met with perhaps were indifference than enthusiasm during their visit in the Ozarks, The Beatles were major 20th century innovators in music, and their popularity has endured. Other things live on too, including the nostalgia of the time. And as you round the curve going north on Highway Y, there is the native stone home of the Pigman Ranch – and impressive reminder that “THE BEATLES SLEPT HERE.”
Sara S. at 9:59 PM
Share